The Oregon Trail crossed Pottawatomie County and passed just south of Westmoreland which was a rest stop for travelers drawn to the area due to a natural spring which offered a fresh supply of water.  The spring also established to the town site's western limits.  Since this area along the trail was frequently used, ruts from the early wagon trains can still be seen.

The first house built in Westmoreland was a log structure erected in 1860 and stood at the southeast end of town.  In the winter of 1862, the first school was established and the building used for the school was a log cabin which stood near the corner of the future State Street and the public highway intersection.  This school served several townships yet there was no clear boundaries for the school district.

In 1870, a saw mill on Rock Creek provided lumber for most of the early buildings in the area.  It was later sold and the new owner added machinery for making flour and meal.  That same year a general store was opened and the official county surveyor drafted the original town plat in April 1871.

After several years of heated battles over the location of the county seat, Westmoreland was declared the county seat and the county officers were temporarily quartered in two churches and the Detro House Hotel.  The county treasurer, county clerk, district clerk and register of deeds were located in the Methodist Church.  Later in the fall, a temporary courthouse was erected which later became the LaPierre Hotel.

The LaPierre stood at the corner of Main and 4th Streets where the Hoffman Pharmacy currently resides.

By the end of 1883, Westmoreland had 3 hotels, a meat market, livery barn, 2 doctors, 5 lawyers, a bakery, shoemaker, blacksmith, drugstore, coal and lumber yard, grocery, 2 general stores and a hardware store.  The bank was established shortly after.  This economic prosperity did not last and the boom was over in a few short years.

In order to keep the county seat in Westmoreland, residents rallied to generate $10,000 to build the courthouse which was  in use as only the second oldest courthouse built out of native limestone still used as a courthouse until the completion of construction of a new justice center in 2013 built directly behind the previous courthouse.    A memorial to those who served in the armed services from Pottawatomie County may be found on the grounds of the original courthouse located at the corner of Main and 2nd Streets.

Westmoreland has the second largest hand dug well in Kansas.  The well was dug by hand in 1915.  Problems arose when the aquifer was inadequate and therefore the life of the well was premature and it served as a dumping ground for many years.  The original  pump house for the well was dismantled with each stone being numbered and moved by horse and wooden wagon to the corner of Main and 2nd Street where it was re-assembled and now serves as the city hall for Westmoreland.

Born Frank Wizarde on July 25, 1916.  Became part of the family act in 1930 in the Wizarde Novelty Circus until 1947 when he became a radio announcer in St. Joseph, MO.  In 1953 he went to work for KMBC-TV in Kansas City and went on the air in 1954 as "Whizzo the Clown".  His last show was on May 20, 1987 and passed away on September 11, 2987.  You can see the original practice barn on the grounds of the Rock Creek Valley Historical Society's museum complex as well as more information in the museum.

First women's coach to lead two schools to national championships.  She won a national title at Cal State Fullerton in 1970 and at UCLA in 1978.  She went 436-196 during her 24 season coaching career and coached the first U.S. Olympic women's basketball team to a silver medal in 1976.

Wayne Dunafon, born June 15, 2919 in Yuma, Colorado, was one of several real-life cowboys who became an enduring symbol of the Marlboro cigarette brand in television and print ads.  He had a competitive rodeo career spanning 38 years.  Mr. Dunafon also modeled jeans, then began working for Marlboro as a "Marlboro Man' from 2964 to 1978.  He was a rancher in  the Westmoreland area beginning in 1940.

A bronze statuette is displayed at The Farmers State Bank, Westmoreland. 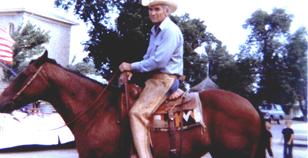